My Week in Chocolate


So, this week's topic was chocolate...lots and lots of chocolate....dark, milk, white...you name it and I worked with it...and had it all over me at some point during the week!!!

Our focus this week was quite simple...we were to learn to temper chocolate...so we practiced...and practiced...and practiced! Our chef instructor, Regis, taught us the basic techniques of tempering chocolate...melting it to exactly the right temperature over a bain-marie (water bath), then working it on the table with a spatula and scraper until it cooled to exactly the right temperature (tabling it), then heating it back up on the bain-marie again to yet another temperature before starting to work with it. All these steps are necessary to achieve a smooth chocolate with a lovely shine....too hot or too cold and you can end up with thick, grainy chocolate or a dull, chalky finish. Each type of chocolate has its own set of temperatures that are required for tempering. We worked most of the week making simple, molded pieces out of the various types of chocolate...and once we made them, we melted them down and did it again..and again...and again, s'il vous plait. I know it seems like this should be quite easy, but, believe me, it took awhile to get the hang of tabling the chocolate and managing to keep it at the right temperatures.

Below is Chef Regis, showing us how to mold dark chocolate after tempering it...he makes it look so easy!! 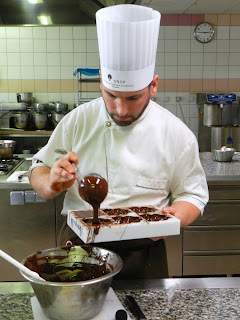 It took me awhile, but I finally got the hang of it... 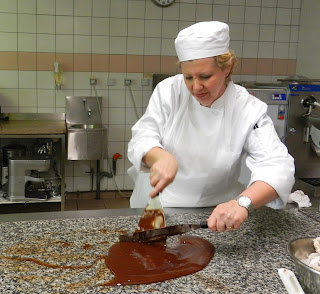 Sometimes my molded pieces turned out perfectly - releasing easily from the mold, no cracks, even thickness and a nice, shiny exterior... 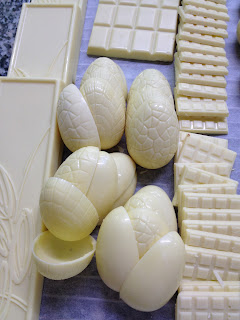 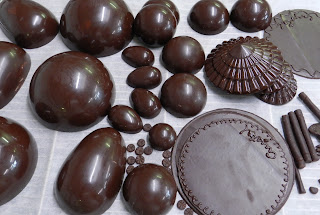 But sometimes...not so much! Below is a picture of what can happen when you turn your back for JUST A MINUTE on a bowl of chocolate on the water bath! 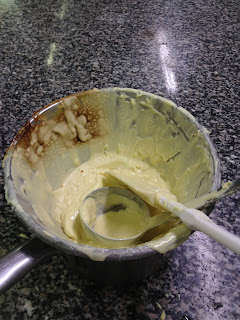 And, unfortunately, not every piece wanted to come out of the mold.... C'est la vie! 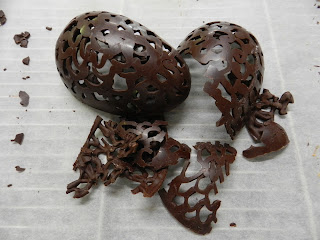 In addition to our simple molded shapes, we also learned some techniques for making hollow, filigree chocolate shapes as well as silver (or gold, or copper, etc) coated chocolate...very pretty. 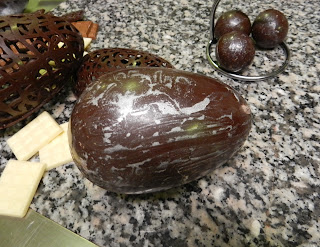 By Thursday, we were finally done practicing our tempering skills, and we were to mold our final pieces and work on assembly of shapes and figures.  At that point Regis took pity on us and finally let us use the chocolate machine instead of tempering by hand...yes, you read that right...I said chocolate machine.  Did I mention that there is a chocolate machine in our lab that keeps kilos of chocolate melted and tempered to exactly the right temperature - it's like a giant, industrial chocolate fountain - with perfectly tempered chocolate just streaming from it constantly?  We, of course, were not allowed to use it earlier in the week - since we were supposed to be focused on fully mastering the foundational techniques of tempering chocolate!  Finally, however, Regis let us use chocolate from there to mold our final pieces for assembling for our buffet...


Regis put 5 (basic) designs up on the board for us to choose from that could be assembled from our basic round/egg/square pieces - a cow, a goat, a worm, a Chinaman and a penquin - we each had to pick two.  I picked the goat and the Chinaman.  We molded our pieces, used melted chocolate to stick them together then added adornment such as eyes (which we piped using white and dark chocolate) and the items such as tails, horns, legs, etc.  Now, I know this seems very simple and, honestly, I know these pieces look like they may have been assembled by a group of 3rd graders..but, it's really not all that easy!  We worked for hours on these pieces - really, hours! 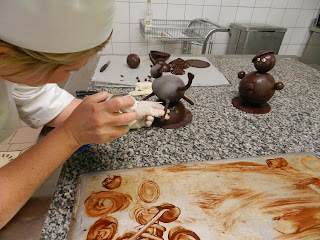 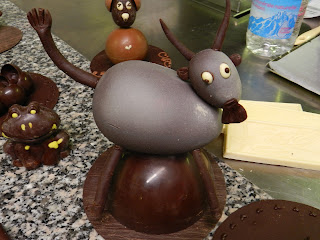 The good news - he stayed together - several of my classmates had various pieces and body parts of their creations bouncing across the tables because they had not sufficiently melted the chocolate to adhere the various shapes...luckily, my goat held together.

The bad news...he looks a little crazed...I think it's they eyes.  I had a pair of lovely, matched eyes I had piped for him, but unfortunately one of them got too hot and melted...so I had to get another eye from a classmate, and it doesn't quite match.  Oh well, I think he has a certain rogue-ish French charm....a certain goaty "je ne sais quoi", if you will.

Finally, by Friday evening we assembled our final pieces and several of the other items we had made during the week and organized them for our buffet...although this week it was more of a viewing than a buffet, since we couldn't really eat the chocolate pieces while they were being displayed. 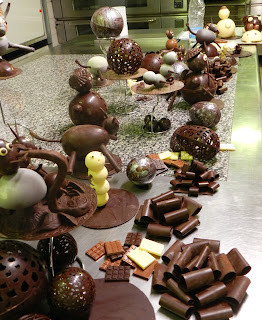 And, when it was over, we broke them up and put them all back in the chocolate machine for the next class to work with...only, of course, after they learn the basics of tempering by hand! 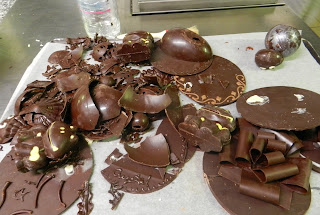 Don't worry, though - I couldn't do that to my crazy French goat - instead I took him up to my room with me - as a matter of fact, he's sitting here on the table keeping me company...staring at me with one eye while I write this post!

Quite the week - I learned alot about chocolate, made a mess of two chef's jackets (I'll be headed to the laundromat this weekend with stain stick in hand) and got a pet goat - what more could a girl ask for?  We start confiserie (confectionary - candies) next week - who knows what I might end up with next Friday?