One of the reasons I chose the pastry program at ENSP was that it offered the option to do a one-month stagiaire after the course work was finished. Stagiaire is a French word that essentially means internship or apprenticeship....as a stagiaire, or stage, you work in a kitchen to watch, learn and grow your skills. Oh, and by the way, did I mention it's usually unpaid....after all, this time is really for your benefit...it's about learning and building for your culinary future. It's a culinary practice that has its roots in French tradition.

I thought that a stagiaire in France would be a great way for me to really get a view into what it would be like to work in a pastry kitchen...after all, that was one of my major motivations for this trip -- to help me make some decisions about what I wanted to do in the culinary field. So, given the option, I signed up!!

When we were about halfway into our program at ENSP we began to discuss options for our stagiaire...what type of program would we like (restaurant? hotel? bakery? pastry shop?), is there an area we wanted to specialize in (chocolate? breads? pastries?) and where in France did we want to go (small town? big city?). I knew that I wanted a boulangerie/patisserie....a bakery/pastry shop....somewhere that would allow me to work with both pastries and breads, and, I was pretty sure I wanted to go to Paris. After all, it's hard to imagine getting the opportunity to work in France for a month and NOT choosing Paris. I knew there were challenges with choosing Paris...the biggest being that many of the recurring stagiaire options for our school were closer to Yssingeaux and Lyon. It would also be more expensive to live there, harder to find accommodations... nevertheless, I still opted for Paris....seriously - wouldn't you?

We were told to submit two or three potential places to the school stagiaire coordinator and they would work to see what spots were available that fit our criteria. In addition to a few interesting shops from the school's "list of regulars", I added an option of my own...a shop that I had seen while doing some searching on "best pastry shops in Paris" and other research... des Gateaux et du Pain. I was interested in this shop for several reasons....first, as the name suggests  (des gateaux et du pain literally translates in English to cakes and bread) it provided an option for both breads and pastry; second, it was mentioned in several Frenchie food blogs I regularly read (Dorie Greenspan, Dave Leibowitz, and others); and, finally, I was very intrigued by the fact that it was run by a female pastry chef, quite a rarity in Paris. (Actually, a female pastry chef is quite a rarity in general...this is still a field mainly dominated by men, especially in France) Well, as luck would have it, there was an opening for a stage at des Gateaux...I was set...I would start there a few days after finishing my course at ENSP...I was going to Paris!!!!

I have to admit, I was pretty nervous...I didn't really know what to expect. I've spent plenty of time in kitchens, and I've even done a few days as a stage here and there in Atlanta...but I was still nervous. I knew that I would be relegated to pretty mundane work, but I hoped I would at least get to do try my hand at some real pastry...and I hoped I wouldn't totally embarrass myself by catching croissants on fire or burning brioche. I also hoped that I would at least be able to communicate at a basic level...I would say my French is "passable"...I hoped they would think the same thing at des Gateaux et du Pain.

So, I show up my first day with my chef jacket in hand and knock on the back door (it's early, so the shop isn't open yet)...when someone answers I blurt out in French "my name is Crystal and I am here to stagiaire" (I had practiced that phrase in French multiple times the night before). I'm quickly escorted inside and shown to the dishwasher...and so the day starts....it's a whirlwind of French and dishes and peeling KILOS and KILOS of apples ...and more dishes. By the end of that first day I am exhausted, my chef jacket that had started the day all white and freshly ironed is wet and dirty, and my head is spinning with French kitchen phrases...I shuffle out to the Metro, my chef shoes dragging...head home and collapse....what a day!


Well, I'd love to write a French culinary Cinderella story...tell you it all turned out magnifique, that I was swept from the dishpit and peeling duty to pipe meringues and make beautiful tarts, all the while chattering with my pastry coworkers in fluent French....all under the nurturing and gentle guidance of my Fairy Godmother Pastry Chef....umm, no...sorry, but I can't....my story didn't turn out quite that way.

Truth is, I washed ALOT of dishes this month - I mean, ALOT of dishes. I did get to do plenty of other things as well...peel apples, zest and juice lemons, butter molds, weigh and prep recipes of all sorts, prepare a few simple items (creams, quiches, Pain Perdu), and help fill and assemble cakes, entremets and tarts...I just didn't do any of the fancy stuff...pretty much, I didn't do any finish work that would be visible to the customer.

And my French...well, I think "passable" may have been a little generous on my part! I'd say I understood about 60% of what was said and I could communicate back to people about 40% of the time...that averages out to 50%....I'm not sure if the French grade on a curve or not, but, even being generous, I don't think that's a passing grade. But, I got by...lots of hand gestures and one-word phrases...several of the staff spoke some English, and were able to translate when I looked totally confused (which, if you follow the math above, was about 50% of the time!).

Although my Chef was petite, blond and dressed in white, you can't really compare her to the Fairy Godmother in Cinderella...nope....think Meryl Streep in The Devil Wears Prada instead...just trade the Prada for a starched chef coat and chef clogs. No magic wand here...she is one tough cookie. She is an amazingly talented chef and a very savvy businesswoman...but very exacting (for example, I was chastised once for improper zesting, told the corners on the paper lining my cake molds were not crisp enough, while one of my fellow stages was sharply reprimanded for unevenly slicing the choux puffs for Paris Brest). In general, the sous-chefs, apprentices and other stages were all quite nice, but, the atmosphere in the kitchen got very tense when the Chef was there...there was no "whistling while you worked" at des Gateaux et du Pain. 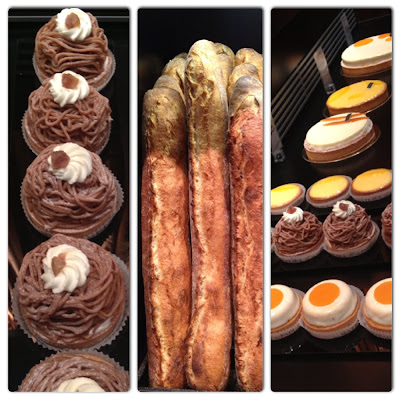 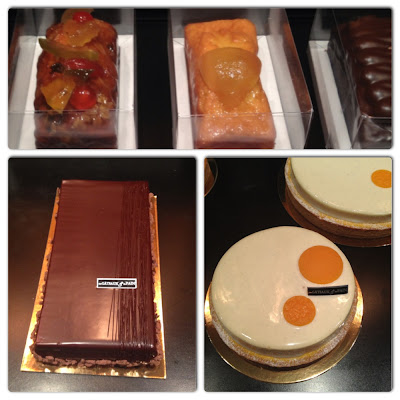 But...I made it! While it was pretty challenging at times, all in all, it was a good experience...and I'm glad I stuck it out. I really learned a lot about how a pastry shop runs...the scheduling and planning for filling the cases each day, prepping and finishing the recipes, the staff and work required. I got to see the recipes and techniques for some absolutely beautiful and delicious breads and pastries. While it was only for a month, I got an up-close and personal view of life in a pastry shop and the life of a pastry chef, which is exactly what I wanted out of my stagiaire. So, while it may not have been a fairytale experience, it was certainly a great learning experience.

And, best of all...I got to live in Paris! I was no longer a tourist...for a month, I was actually a Parisienne....riding the Metro to work everyday, coming home to my charming apartment in the Marais and then walking to a cafe for a late dinner. And, on my days off, I got to shop at Place Madeline, stroll along Blvd Saint-Germain, hang out in the Luxembourg Gardens, or visit the Orsay...not such a bad gig, huh?