Loving Life in the 4th!!

When I finally decided that I wanted to do my stagiere (internship) in Paris, I was pretty excited...a month in Paris...c'mon, it doesn't get much better than that! There was another one of my classmates, Jen (the very fun, former-engineer Aussie) who was also planning to do her stageiere in Paris - so, we decided we would look for a place to live together. We were so excited...we had visions of historic buildings, markets and sidewalk cafes just waiting for us in Paris...it shouldn't be so hard to find a charming place to stay in the midst of all of this, we assumed. Boy, were we wrong...it seems that in Paris, like in any big city, it's pretty challenging to find a decent place to stay for only a month...especially if we wanted to be anywhere near the center of the city...which, of course we did. After all, we were only there for a month and we wanted to experience as much of Paris as we could, and we also didn't want to spend hours a day on the metro going back and forth to our stagieres, which were near the center. There were plenty of closet-sized studios available...we would be fine as long as one/both of us didn't mind sleeping on a pull-out sofa, after we had spent an hour on the metro to get out to the suburbs...heavy sigh...not quite the vision of Gay Paris we had in mind. We were pretty discouraged when, after a week of endless Internet searching and sending literally hundreds of email inquiries, we were still homeless. Finally, one day after class I was greeted with a positive response in my inbox...actually, yes, the 2 bedroom apartment in the 4th arrondissement I had inquired about was available....WOOHOO!! OK, it was expensive, but, quite frankly, we'd given up on "reasonably priced" as a requirement about 200 email requests ago. So, we snatched it up...at this point we only had two weeks until we were supposed to arrive in Paris, as long as it was at least half as nice as the pictures in the rental website, we would be fine...at least we had a place to sleep.

You know how you have that gnawing worry in the back of your mind that things really won't work out as well as you hope...well, I had that feeling in spades as we headed to Paris to settle into the apartment....what if it was a dump, in an unsafe neighborhood, dirty....we would have paid LOTS of euros (a big chunk of which was a non-refundable deposit) to live in French squalor for a month....these were the worries that went through my mind as we got into a taxi at Gare de Lyon and headed for 4 rue du Tresor, in the 4th arrondissement.

That sinking feeling in the pit of my stomach began to subside as our cab pulled into our neighborhood - it looked pretty nice - no squalor or French ghettos to be found...as a matter of fact, it actually looked pretty nice and fun.... 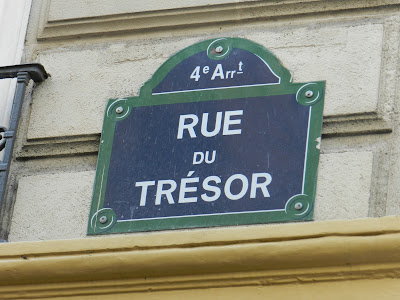 I began to relax even more when we pulled up to our apartment building...it was smack-dab in the middle of this very fun neighborhood, but tucked away in a small dead-end sidestreet lined with shops and cafes...so far, so good. 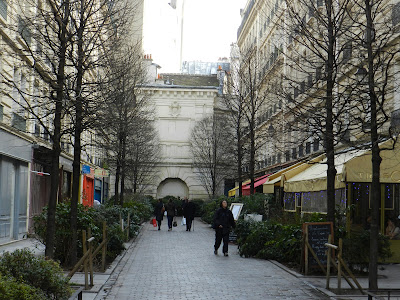 When we finally made it up to the apartment, all nervousness and worries slipped away - our apartment was fantastic - no, really - fantastic!  It was absolutely gorgeous - seriously, gorgeous - it really looked like the pictures on the rental website - how unbelievable is that?  High ceilings, floor-to-ceiling windows, beautiful moldings and trim, French-shabby-chic furnishings, lots of space (for an apartment in Paris) - it was perfect! We couldn't believe it - after lots of worrying and searching, we had actually ended up in an amazing apartment in a great part of Paris - INCROYABLE!! 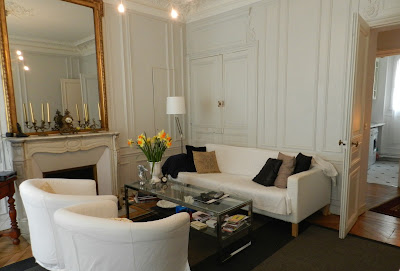 So, I have to tell you, life in the 4th Arrondissement has been pretty cool.  The center of Paris is divided into sections, or neighborhoods, called Arrondissements (abbreviated Arr)- there are 20 of them, and each has its own unique character.  We happen to be lucky enough to have landed in the 4th Arr - on the right bank of the Seine river, in the heart of the city - our neighborhood is called Le Marais and it's known to be "trendy, bustling, and throbbing".

Our neighborhood is anchored by major two major landmarks - the Hotel de Ville... 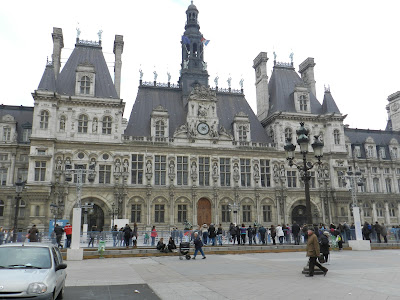 ...and the Place des Vosges. 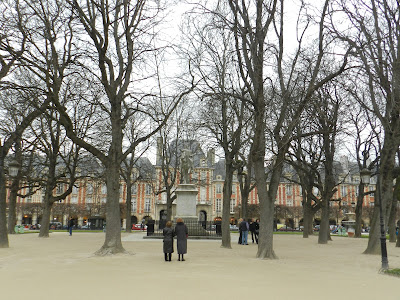 We are right across the river from Notre Dame... 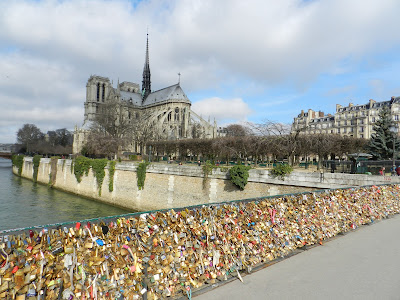 ...and you can see the Bastille as you head down the Rue de Rivoli. 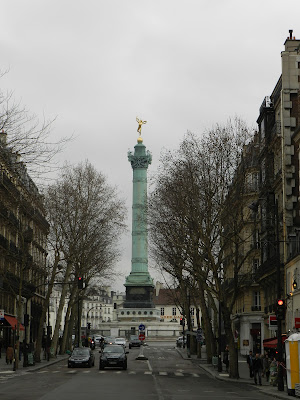 One of the best parts about living in this area is that we have everything we need right at our doorstep - or just a very short walk away.  Conveniently, there were 2 metro stops within a 10  minute walk - this made it very convenient for getting to work and for zipping around Paris.﻿ 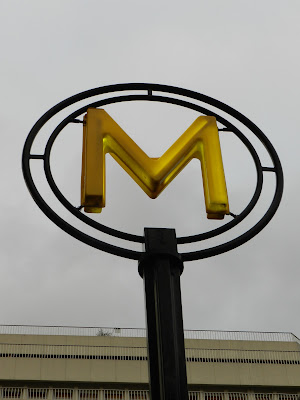 There was no shortage of places to eat - there were patisseries, cafes, bistros, restaurants, markets - you name it, the Marais has it.  There were multiple boulangerie/patisseries (bakery/pastry shops) on our block - I grew quite partial to one just around the corner from our apartment - stopping here many mornings for a cafe au lait and pain au chocolate... 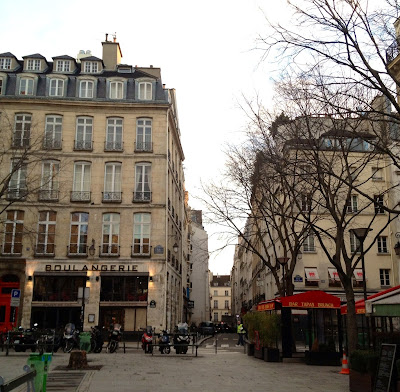 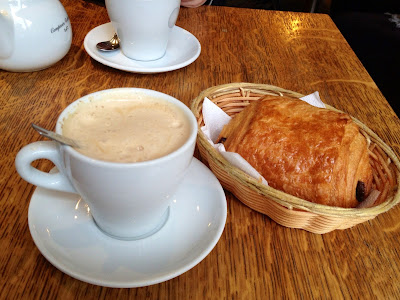 Lucky for me, there was also a Starbucks around the corner for those mornings when I didn't have time for a French-style breakfast. 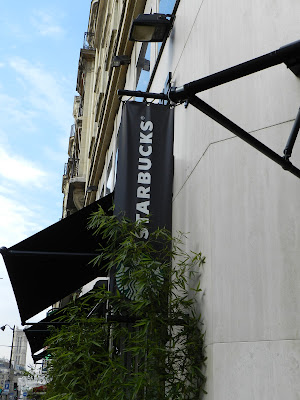 I am finding it hard to actually describe how many cafes there were around us - they were everywhere - there were 5 on our little street alone!  And there were always full - it's just like you imagine Paris would be - people sitting in tiny little tables lining the streets (yes, even in winter), drinking coffee and wine, smoking, and chatting in French (with some English and other languages thrown in for good measure) at all hours of the day and night. 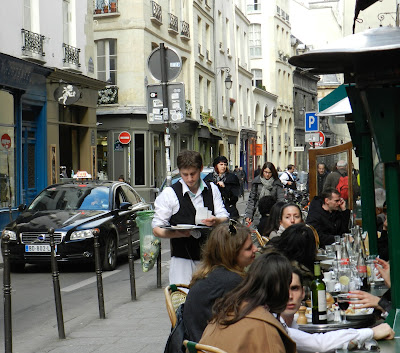 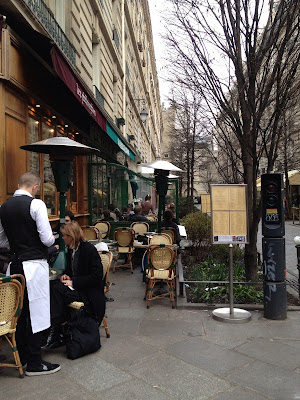 And, of course, there is great shopping in the Marais...this neighborhood is known for its' shopping - filled with boutiques of all kinds - clothes, food, books - you name it, there's a shop selling it somewhere within a kilometer of my apartment. 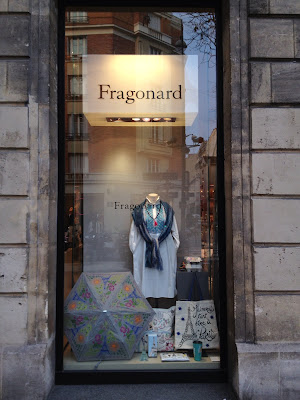 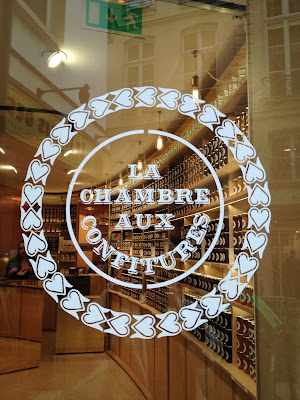 Most days our neighborhood was packed with people - locals and tourists - shopping, eating, strolling.  We had a few days, however, when it quieted down - about half-way through my time in Paris, we woke up to quite a surprise - snow falling outside our window and blanketing the streets.  While it was a little colder than I would have liked, I must admit that the 4th Arr looks charming covered in snow!
﻿ 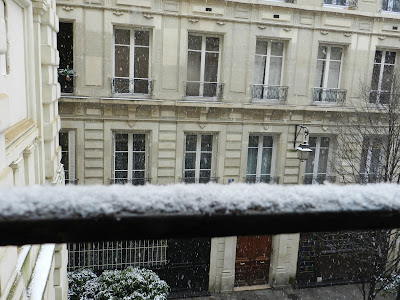 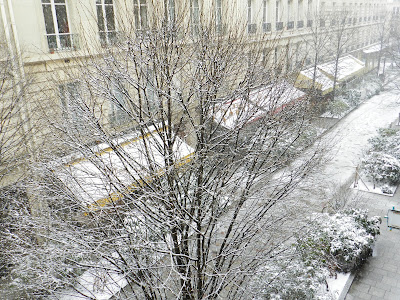 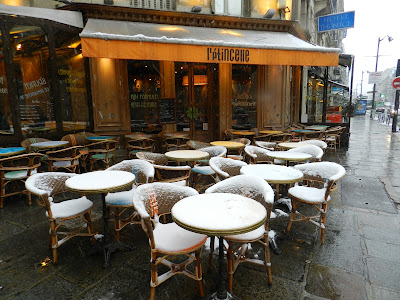